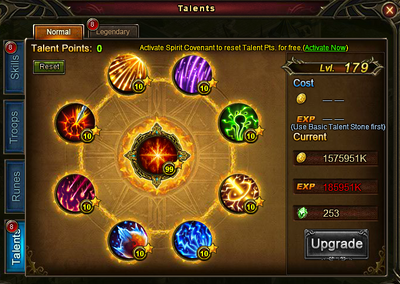 Talents are used to add passive upgrades to your class's existing abilities. This feature unlocks at level 50 for all players. Legendary Talents are unlocked after achieving Class Advancement.

To upgrade a talent's level, players must spend both gold and experience points. Experience points come directly from a player's earned EXP. You cannot lose a level by spending experience points in your talents. But if you do not have the required amount of experience points to level a talent, you must wait until you have earned more EXP. If players have Basic Talent Stones, they can be used in place of EXP.

There are a total of nine talents for each class. The active talent is "Holy Seal." Players will automatically have "Holy Seal" added to their toolbar once the Talent interface is available. The other eight talents are passive and apply their bonuses constantly. The type of passive talents available to you vary depending on your class.

All talents have a level cap which they cannot be upgraded beyond. The caps vary per talent and are listed in their tables below. Your access to higher level talents is dependent upon Holy Seal's Cap. Holy Seal itself must be upgraded to a certain level before your passive talents are available. This is shown by the table below. Your Talent Level, and the cost of the gold and EXP you must pay, is shown on the talent level chart.

Players can reset their Normal or Legendary Talents for 895 (Un)Bound Balens each; this frees up any assigned Talent Points to be assigned to other skills. If players have a Spirit Covenant active, Talents can be reset for free.

Shortens Meteoric Destroyer's cooldown and adds a chance of restoring a percentage of the caster's maximum HP.

Rain of Fire has a chance of decreasing the rage consumption of Delphic Thunder Frenzy of 50% during 2 turns.

Shortens Delphic Hell Thunder's cooldown time and has a chance to form a damage absorption shield during 3 turns.

Lightning Bolt has a chance of decreasing your rage consumption by 30% for two rounds. (**Talent page is correct now, 30%)

Increases cooldown of Restoration skill while also increasing the amount healed. Adds a chance to restore the target's rage by 10 points.

Multi-Shot has a chance of decreasing the rage consumption of Armor Piercer for a certain number of turns.

Armor Piercer has a chance to cause the next skill attack to be critical hit.

Arrow Strike has a chance to increase your crit damage for two turns.

Shortens the cooldown time for Delphic Death Star and increases the ability's chance of a critical hit. 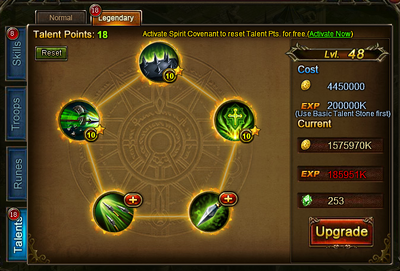 Armor Piercer can cause x% physical damage to an additional target.

Has a chance to reflect x% damage with a succesful block.

Note: this Talent appears to stack with the Reverse Damage ability.

Shortens Whirlwind cooldown time by x seconds and has chance to cause a bleeding effect which deals y% physical damage; lasts 3 rounds.

Intercept has a chance of restoring x% of your HP.

Slasher has a chance to increase your skill damage by x%; lasts 2 rounds.

Shadow Thrasher has a chance to decrease damage received by x%; lasts 3 rounds.

Since Patch 1.60 there are talent caps active, that prevent players from levelling their talents above a certain level dependent value.