View source
watch 01:36
We're Getting Mutants in the MCU - The Loop
Do you like this video?
Play Sound

Runes are a type of battle skill. In battle, the two rune slots are placed on the right side of the hotkey bar and are assigned the hotkeys "Z" and "X".

The Rune system is unlocked when your hero level reaches Lvl.35.

Learning and upgrading Runes is done by using Runestones. There are two types of Runestones, type specific (such as Brutality, Blood, Heal etc.) and generic. Type specific Runestones are needed to gain access to a rune for the first time.

Runestones are also needed to upgrade Runes. They give 50 Exp each and can be earned from Tank Trials reward, Jewel Hunt, League Shop and Glory Shop, also they are rarely found in chests from Tower of Kings, from Marriage Chests and in Dimensional War rewards.

Another way to upgrade Runes is to use old Runes!

A rune's cooldown depend on its rune level. The number of uses per fight also depends on rune level but is different for each type of rune.

Note: When you have different runes and at different levels including runes, the difference between the cooling times of both runes will be reflected in lower level rune.

Experience points needed to level runes up and player's minimal level to obtain them. 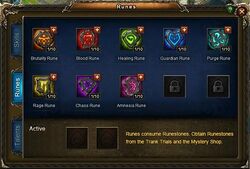 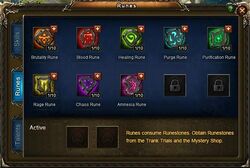 With Wartune 3.1 patch, players who reach level 80 and complete Class Advancement quests can upgrade runes to 8 more levels after the 10 normals levels, the called Advanced Runes.

In order to upgrade a normal rune to its advanced form, players need to click the "Advance" icon below their icons, but to continue the process, it requires 10 Mystery Runestones that so far can only be purchased from League Shop for 20 League Insignias each, or exchanged in Rune Exchange events.

This section only applies to Wartune before the update to version 1.6. Since that update the following runes are not available or usable anymore! Runes can have a multitude of effects depending on which type of rune it is, along with the level of the run.    All runes have a Cooldown of 60 seconds.

Does damage to all enemies.

Recharges rage meter of the character using the rune.