Once players reach level 16, they acquire the ability to equip and ride a mount. While on a mount, characters gain additional stat bonuses of Strength, Intellect, Endurance and Armor. As they are trained and leveled up, the bonuses increase. Mounts also give improved running speeds while exploring maps

Every player receive a White Battle Steed as a default mount once they reach Level 16 and have the ability to gain additional mounts by upgrading stables, special events, quests and Balens purchases. The more mounts collected, the stronger characters can become. 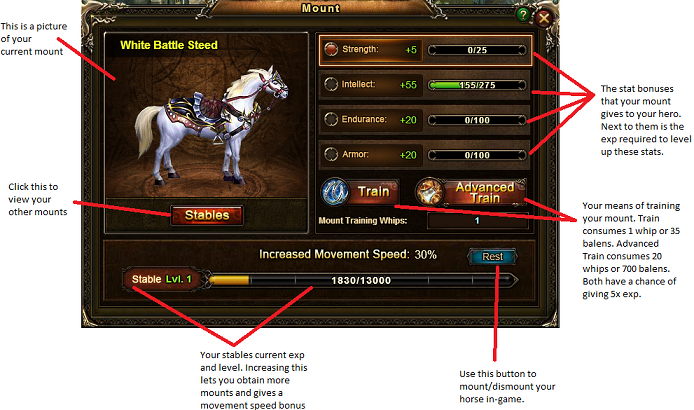 There are 4 types of mounts:

It's possible to view which mount another player is currently riding by viewing their profile and clicking on the saddle icon. This will bring up a screen that shows the current mount they are using and the total accumulated stats.

Mounts can be trained by using of Mount Training Whips, gaining additional power.  Every time a stat that is trained gains a level, that stat increases by 5. Each mount has specific stats that "stack" with other mounts owned, so even if you equip another mount, the stats will be the same. For example, if you own the White Battle Steed with a +5 strength bonus and the Shadow Steed with a +10 strength bonus, your total bonus would be +15 strength.

Mount Training Whips can be found in:

In patch 3.1 part I, a new feature was added to mounts, allowing players to enhance their stats by refining them. All mounts (except temporary mounts and VIP mount) received stars, which allows a further increase in stats:

In order to refine mounts, Mount Hoofs are used; every attempt increase the blessing bar by 1, with a chance of filling the whole bar at once. Each star gives +10 to all stats, which means the stats given by unrefined mounts can be doubled. Also, the buffs are stackable and don't expire.

In this feature, 30 random mounts become available to be bought by players by consuming Beast Soul. There's also an option to refresh the list and guarantee that 1 unactivated mounts appears for 1999 Balens.