A guild is a player organization created by an individual. They provide numerous benefits, both social and for battle. 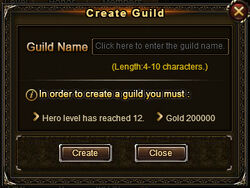 Players may create a guild once they reach level 12 and are not already a member of another guild.

To create a guild, click the "Guild" icon on the bottom toolbar. This will pull up the Guild Panel (guildless). Click the "Create Guild" button located at the top center of the panel.

Guilds cannot have the same name as another guild that already exists on that server.

If you leave a guild, you cannot join another guild for 24 hours.

There are two types of Guild Rank: Level (denoted in the Rank box on the guild panel) and Strength. Both rankings can be seen in the global Rankings menu located at the top right of the playscreen.

(I don't think the rating is entirely based on territory levels, for 2 reasons. First among guilds with all level 10 territories there are still vast differences in rating. second I run a level 10 guild ranked 9th for level with all territories level 10 except a level 9 altar, and the guild in 8th place has a level 8 altar yet they are still ranked above use by a rating difference of 3mill. Any explanations or speculation?)

(I believe this to be incorrect, when kicking multiple players of long standing absence my guild ranking drops. I have done this numerous times with the same result and hence believe the above to be bogus. My belief from what I have seen is that it is the total BR of ALL members and sets each day, the BR attributed to each player and hence included in the total CAN be affected by buffs held at the time the rank sets, including those that have logged out buffed and not yet logged back in.)  (Confirmation?)

(I believe it may be correct. In a guild on S60, we cleaned house by kicking all players inactive for 8 or more days, which were 35 or 40 players, and our strength hardly budged.)

Anyone in the guild, regardless of member level, can Contribute to their guild. Contribute to your guild by pressing the "Contribution" icon on the Guild tab.  Contribution points can also be earned in a number of ways:

You must meet the minimum levels shown to receive Guild Contribution.  While you can contribute 900 gold to your guild and it will count towards the total guild wealth, you will not receive any guild currency awarded to you.  The player's Contribution is stored as currency to spend on guild skills, on items at the guild shop, and at the altar to spin the guild's blessing wheel.

If the player leaves or is kicked from the guild, all unspent contribution will be instantly lost.

Guild wealth can be used for:

Only the Guild Master can use wealth for upgrading the guild level, upgrading guild territories, summoning Divine Altar, or buying skill bonuses in the Guild Tower.

The Assistant Guild Master can buy skill bonuses in the Tower also.

Each week, 500 wealth per guild level is charged as "upkeep." It is deducted directly from guild wealth and not from member contributions. This is to ensure that guilds are active and functioning. If there is not enough guild wealth on the deduction date, the following week's charge is doubled. If the second week's payment is missed, the guild is disbanded.

In ascending order of importance;

Note: When you are kicked, you can immediately join another guild. If you leave a guild on your own, you have a 24h cooldown before you can join or create another guild. The ban can be removed with "Covenant Emancipation" from the Shop for 395 Balens.

This is where most of your contribution will go. The skills are very beneficial but get expensive fast. They are bought with guild contribution.

This area is not upgradable. Two events can happen here: Invaders and the Guild Tree of Ancients.

From 9:00 AM to 22:00 PM (server time) every hour, a message will appear in the guild chat channel stating that the guild chamber is under attack. At this point, 3 level 40 Skeleton warriors will appear with a party of 4 Invaders to do battle. Defeating the entire group will reward the hero with 10 contribution. The invaders pose no threat and will do no damage if ignored. The invaders disappear thirty minutes after spawning if they are not eliminated.

Guild contribution rewards for exterminating intruders do not count toward your Daily Devotion quest that asks you to make a daily contribution to your guild.

This may be summoned by the guild master once a day and will last for 15 minutes. Every member of the guild who resides in the guild chamber when the Tree of Ancients is summoned gets free EXP.

You can increase your personal EXP earnings by paying 200 contribution points for a 20% increase. This may be used a maximum of five times.  The button for this appears on the left side, beneath the energize info box.

Depending on where these items spawn, the person who collect them can receive 1, 5 or 10 guild contribution, applied directly to the guild's wealth account.