Cloud City is a new feature introduced to players at the release of version 2.1.  The area is available to all players at level 15.

Initially, Sylph Atoll, Sylph Exchange and Sylph Arena, located in the western side of Cloud City, were brought as new features for the game.

In Part II, Gold Rush, name changed later to Amethyst Mine, was added, whose portal to this quarry area is in the southwest corner; and in part III, Circuit Quests were added, which had an NPC in the eastern side.

In this patch, Lost Treasure was added, having an NPC in the eastern side, close to Circuit Quests NPC. Furthermore, in the center of Cloud City, there are 3 statues, which shows the 3 winners of Class Wars.

In this patch, a new feature was added: Sky Trail, which had an NPC in the center-northeast side of Cloud City, close to Hall of Heroes NPC and Bounty Board.

In this patch, Marriage System was added, new features were added for level 80 players, such as Class Advancement, and the whole Cloud City was redefined.

In this patch, Wilds Shop was added.

Navigation in Cloud City is a simple point and click system just as you would in the Wilds outside your main city. You may also bring up the city Map and click on any point on the map. Your character will then move to the corresponding point in the City. You may switch back and forth from Cloud City to your main city by clicking the CITYicon in the upper right corner of your UI. 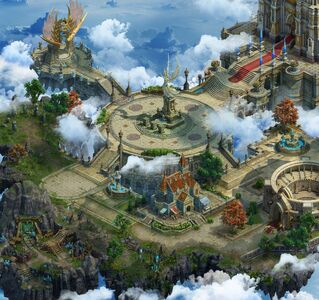