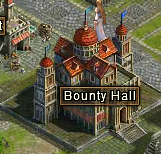 The Bounty Hall was a Building located in the player's city.  While the building can still be found there, its functions, as of patch 2.1, have been moved to the Bounty Board in Cloud City. The building itself is no longer interactable.  Normally, a player can complete up to twenty bounty quests per day. Sometimes, an event will allow you to complete thirty bounty quests.

The board always provides four quests at a time and will reset automatically after thirty minutes. The available quests can be reset manually for free twice a day and afterwards for 10 Balens for each additional reset.

Only one bounty quest can be active at a time. The quests are separated into different levels represented by five colors: white, green, blue, purple and orange, with white being the lowest level and orange being the highest. The higher the level, the larger the reward offered.  Note that it is possible to fail a bounty quest.  For example, you fail to defeat the target of the "Bounty Hunter" quest.  If this happens, you do not lose the quest.  You may keep the quest and repeat it until you either abandon or complete it.

Abandoning a quest will allow the player to accept a new bounty quest instead, but will forsake any possible rewards the old quest may have given.

To calculate the amount of EXP and Gold you can get, look at this table: